Concept artwork for Their Shoes.

The DigiGround team was very honoured and excited when we found out that our Creative Jam entry was announced as winner by Adobe Australia.

To celebrate the launch of Adobe XD, Adobe Australia held a special online event called Adobe Jam. They asked their followers to create and submit an application design according to a brief. Entries were judged by the Adobe Australia team, and the winner was announced on 30 November, 2017.

The brief was to design a mobile app using Adobe XD including the phrase “See a Different World”. Our design team put their heads together and decided that they wanted to design an app that would make a difference to the world and show people what is not being covered in mainstream media. Our graphic design team worked together to build this amazing app using Adobe XD. From concept to brief to design – we worked as if we were creating an app for a new client. And very soon, Their Shoes was born.

Their Shoes is a prototype of a mobile application that aims to shine light on important causes affecting the world. Users can record a video directly in the app, nominate who needs to see the video and then submit it for approval to Their Shoes. Once a video is approved, other users can watch it and support it, share it or follow it. When a video is supported by enough people, Their Shoes will make sure the right person in power or of influence, receives the video. Once this happens, the video is given the “Their Shoes Footprint” to show that this video has been sent.

DigiGround is incredibly proud of what we have put together, and we hope you enjoy it as well! You can see our demo here. 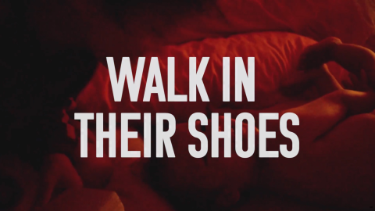